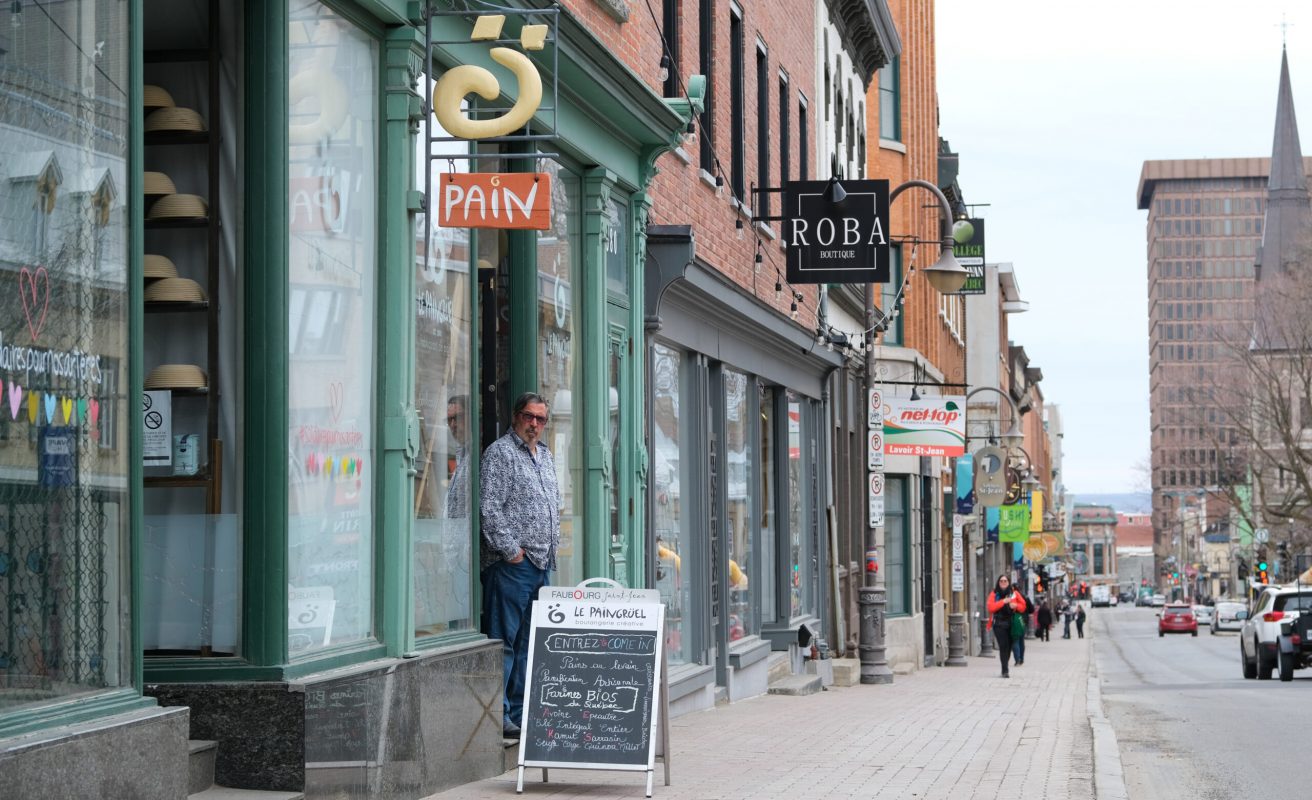 Against all the odds, the bread-loving couple, Lise Colletti and Jean-François Schoofs have overcome many challenges thanks to the love of their loyal clientele, which now extends beyond the borders of the Saint-Jean-Baptiste district.

It smells so good when you walk into the Paingruël bakery! Behind the counter, as you enter on the right-hand side, a radio station is playing music from the 70s, 80s and 90s, broadcast by a Paris radio station.

“It’s Radio Nostalgie in Paris!” says Jean-François, « It’s live. From time to time, they say: « It’s 6:00 p.m. ». Good afternoon. Then the customers look at us with a look in their face that says: « But what’s happening to me? » adds Lise, laughing.

Lise has a great sense of humour, and her laugh is contagious. That laughter is part of the soul of this bakery on Saint-Jean Street.

It’s often these little details, no matter how trivial they may seem, that influence me to come back to a place.

Like works of art, the loaves of bread are displayed on glass shelves on which time has done its job. These traces are part of the history of the place and are the soul that calls for confidences.

“I am not at all surprised that people confide in each other so much. That’s the bread. They feel they can talk here. They always told us a lot of things, things they didn’t tell us before. What they’re going through, what they’re feeling.” Lise Colletti, co-owner of the Paingruël bakery.

The pandemic has brought with it many pleasant surprises.

“People have become much closer to us,” says Lise. We have a regular clientele that has followed us for 20 years, but the pandemic has also brought new clients. It reassured people to know that we were there, and they confided in us a lot, » continues Lise, whose voice is naturally very reassuring.

Despite the passing of time and a move to new premises, Lise Colletti and Jean-François Schoofs have managed to maintain the bakery’s identity that puts consumers at ease and prone to confidences.

“I was very stressed about the move,” Jean-François admits. “We shouldn’t have moved more than 500 metres away, because I was afraid of losing customers. So when I found this room space with stone and brick walls and ceilings high enough to carry the oven, it fell extremely well.”

In anticipation of this milestone, the yeast was frozen for two months and four days. I had known from the great MOF (Maître Ouvrier de France) chefs from Belgium and Paris that it was possible, » says Jean-François. We did it, and it worked. It took a few weeks, but it worked, » he continues, referring to the relief that the awakening of the yeast brought. Otherwise, it could have been the end.

Every day, 12 different pieces of bread and 12 varieties of pastries are offered. They are all the same recipes as 20 years ago, developed by the founders of the bakery, Mélanie Jacob and Serge Desroches.

However, there are a few new additions, including a lemon meslin bread, cheese rolls, a popular apple and nut bread – with lovely pieces of apple in the crumb – and an algae bread called Thalassa, whose organic algae come from Grand Manan Island, New Brunswick.

On the menu, today: a baguette torchon invented thanks to a baker’s mistake, which makes an excellent sandwich bread. I salivate. Don’t miss the Guinness bread on St. Patrick’s Day.

The taste of the bread here is exemplary; the gestures associated with the elaboration of the products are those of true bakers. The ingredients are as real as nature. Only organic flour is used to make the loaves of bread: Hubert Lacoste, la Milanaise and le Moulin de la Rémy.

The most famous creations are the St-Séverin and the Pérec, a multigrain bread without wheat, named in homage to the writer George Pérec, who wrote the novel La Disparition without using the letter e. What a feat!

“A customer who was friends with George Pérec came by our bakery and couldn’t believe that a loaf of bread was named after him,” says Jean-François. “This man taught literature at Laval University for three months, and he used to pick up his bread here every week.”

« Those are nice encounters, » says Lise.

“We don’t always know who people are. We look everyone in the eye, no matter who they are or what they do,” she says. “Everyone comes to get bread, from the drunkard to the Prime Minister,” adds Jean-François.

Some make the detour from Ottawa to come and get bread from us. Orders arrive in from Montreal and Charlevoix as well.

Everything is made of wood!

“The ambient air remains confined in the wood,” explains Jean-François. “When it’s hot, it also tempers the bread well. Most bakeries use electrical cabinets, but we trust wood. We even have our cabinetmaker in the neighbourhood who customizes everything for us.”

“There’s a human dimension that’s so important in bread. The baker has to stay awake, and he can’t sleep while it’s baking or while it’s rising. At all times, he must feel the bread.” Jean-François Schoofs, co-owner Paingruël

Lise and Jean-François bought the bakery on September 4th, 2007. Labour shortages, the arrival of supermarkets and the multiplicity of bakeries have been their most significant challenges over the past 13 years.

There was even vicious unfair competition that was overcome thanks to their loyal customers.

“From one day to the next, employees left me with my recipes to become my competitors,” says Jean-François, who is still a little burnt out from this misadventure. “None of them are still in business today,” he points out.

They speak very highly of loyal employees on whom they can count and for whom they have a lot of respect, such as the one they call Michelle-des-confitures, the very first Paingruël employee, who has been making jams for them for 20 years. Her little jars of pure happiness are always displayed in the beautiful red cupboard to the right of the entrance to the shop.

She even has prepared an exceptional strawberry-based recipe flavoured with balsam fir to celebrate the 20th anniversary.

The croissants are crispy and tasty. Photo: Radio-Canada/Allison Van Rassel

“We believe in our product so much. It’s borderline crazy. I love these loaves of bread so much. And the customers never let us down. They’re our backbone, and that’s what keeps us alive.” Lise Colletti, co-owner of the Paingruël bakery.

And the acronym Paingruël, what does it stand for? I asked.

“It doesn’t mean anything at all!” Mr. Colletti answered. “But the children recognize it,” Jean-François adds. “They can’t even read, but they associate the image with bread. That’s what I find most heartwarming.”

Something tells me that the comfort of the bread of Paingruël is here to stay, because despite the most insurmountable challenges, the bread, the real bread, remains the utlimate refuge.